McCord still banned from the Masters 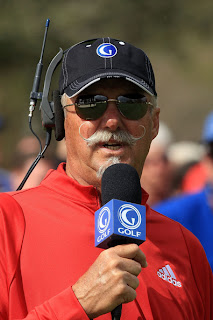 Back in 1995, CBS television golf analyst Gary McCord got banned from the Masters for saying "they don't cut the greens here at Augusta, they use bikini wax." He also described the bumpy terrain as looking "suspiciously like body bags."

These quotes are definitely not ideal for the Masters telecast, but it seems a warning or suspension could have been sufficient. McCord has a different type of humor, and his banter with David Feherty makes for good television. It would be nice to see him return to Augusta now that it's been 16 years.

Tom Watson actually wrote a letter to CBS and the Masters chairman demanding that McCord be fired, and apparently this had a big effect on McCord's future at the tournament.

McCord isn't the first to be blackballed from the Masters. Jack Whitaker was taken off the air for comments during a playoff at the 1966 Masters when he called the gallery a "mob." Whitaker's suspension lasted four years.

"I assume that what I did is viewed as something short of manslaughter," said McCord. "It's a misdemeanor, not a felony. With good behavior I may be out on parole in a couple of years." This may turn out to be a life sentence for McCord.
Posted by Matt at 8:59 PM